Hard Water: Scaling on faucets, showerheads as well as spotting on the dishes and glass shower doors. Over time hard water can damage plumbing and shorten the lifespan of appliances.

Iron: Orange or brownish tint to the water and staining. Iron can stain clothing as well as toilets, sinks.

Chlorine: Chlorine is used to disinfect the water and can cause both odors and taste issues with your bathing and drinking water. Chlorine can also fade laundry and dry out skin and hair. Although necessary it recommended to filter it out before using.

Hydrogen Sulfide and Sulfates:  A rotten egg or sulfur smell can be an indicator. (Note: If at only one sink could be bacteria growth in the drain. If only on the hot water side could be from Anode rod in your water heater).

Nitrates: These occur naturally as organic matter decomposes and are often raised by the use of fertilizers in both residential and agricultural practices. Nitrates usually pose the greatest risk to infants and pregnant women as it can hinder the oxygen carrying cability of the blood.

Arsenic: Naturally occurring from the erosion of deposits in the bedrock. Long term exposure can have negative health impacts.

Tastes/Smell Issues: These can be caused by a variety of chemicals such as Chlorine, Herbicides, Pesticides as well as chemicals used to treat the water at treatment facilities

Lead: Can be caused by the use of lead pipes, solder and other plumbing material typically used in older plumbing.

Haleocitic Acids/Chlorites/ Total Trimethlazynes: These can be caused as a byproduct of drinking water disinfection.

Not sure how to fix these problems? Have one of our technicians come out to test your water and take care of answering all your questions. 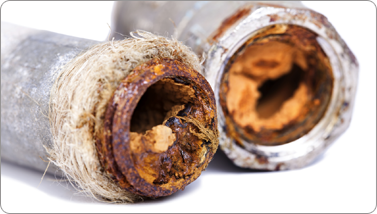 Anion exchange: In demineralization, bicarbonate, chloride and sulfate anions are exchanged for hydroxide anions from the anion exchange resin.

Arsenic: A toxic, odorless, tasteless element which has been used in paints and pesticides. Arsenic is can be hazardous at high levels

Backwash: Part of the regeneration or cleaning cycle of water treatment equipment. The backwash pushes water in the opposite direction of normal flow to clean the filtration media of material collected during its normal operation.

Bypass: A connection which allows the water treatment equipment to be circumvented during cleaning cycles, maintenance, or any other customer driven times like coating the garage floor.

Calcium: An element which when present in water can build up in the plumbing and appliances. It also becomes obvious when looking at faucets and showerheads. Calcium is one of the causes of Hard Water.

Calcium carbonate: Found in limestone which when water percolates through it picks up and increases the hardness of the water.

Cation: A positively-charged ion such as calcium, magnesium or sodium which, in an electrolyte solution, is attracted to a cathode via a difference in electrical potential. Cation resin is used in salt or potassium based softeners to remove the calcium (hardness) from the water.

Hardness: The level of calcium carbonate equivalent in grains per gallon. It causes scale formation in and on pipes, fixtures and water heaters, reducing their efficiency, appearance and lifespan. Read more about fixing your water’s hardness here.

Hard water: Water containing total hardness of one grain per gallon or more. The hardness levels can go from hard water to extremely hard. Have one of our technician’s test your water so you know what you are up against.

Heavy metals:  Things such as lead, mercury, chromium, cadmium and arsenic which have undesirable and unhealthy effects.

Ion exchange: A reversible chemical process in which ions from a permanent medium, such as ion exchange resin, are exchanged for ions in a solution or fluid mixture. In water softening this is the process of exchanging calcium (hard ion) for either a sodium chloride or potassium chloride (soft ion).

Nitrate: A nitrogen compound, NO3, commonly found in ground water or surface water as the result of runoff from fertilizers, which can be harmful in high concentrations, especially to young infants.

Potassium chloride: A potassium based salt used to regenerate the Cation ion resin.

Radon: A colorless, odorless, tasteless radioactive gas, Rn, occurring naturally from the decay of radium, considered carcinogenic when inhaled by humans. It can be effectively removed from water by aeration or filtration through activated carbon.

Regeneration: Restoration of the capacity of ion exchange or catalyst media for further use, also called recharging or rejuvenation

Reverse osmosis: A water treatment process that removes ionized salts, colloids, and organic molecules by forcing water through a semi-permeable membrane against the natural direction of osmosis, that is, from a more concentrated solution of impurities in water to a less concentrated solution, cleaner water.

Scale: A deposit of mineral solids on and in water pipes, containers, fixtures and appliances through contact with water containing carbonates or bicarbonates of calcium and magnesium, especially when the water is heated.

Soft water: Water which contains less than 1 grain per gallon, or 17.1 milligrams per liter of hardness minerals, expressed as calcium carbonate equivalent.

Water softener: A devise utilizing a bed of ion exchange media, trading calcium and magnesium ions for sodium or potassium ions, producing softened water, which is more desirable for consumption as well as cooking, bathing, laundry and cleaning, or a chemical used in such a devise

Water softening: The process by which calcium and magnesium ions are removed from water, typically via the use of an ion exchange medium.

Here are a few of the common questions when it comes to Whole house water filtration systems.

We still do business the old fashion way. Our products are made in the United States. We spend our money upgrading our equipment rather than on infomercials, high name and cost endorsements, or running radio commercials every five minutes. Since we are local we design our equipment specific to the area so that we do not have the issues most people have experienced with water treatment.

Do I need something for drinking water if I have a softener?

Yes, a separate solution would be suggested if you only have soft water. The softening resin does not target chemicals and as such soft water will not rectify the taste of the water. Thus you would need to look at an option such as Reverse Osmosis or Whole House Filtration. Give us a call and a technician can go through the different options to help determine which would be the better option for your specific situation.

What kind of salt should I use?

This is a personal choice as San Tan Water Solutions does not require that any specific salt or potassium be used in its products. Although we do not endorse or require a specific brand to be used Mortens System Saver II pellets are the personal preference of our employees.

Why does the water taste bad?

Much like the odors in water taste is heavily influenced by chemicals. Heavy metals and mineral content can also have an impact on taste. When looking at how water is treated with chemicals and disinfected with chlorine it easy to see why the water taste so unpleasant.

Why does the water smell bad?

Smelly water can be caused by several different factors. The most common of odors in water, especially municipal water is chemicals. Chlorine is used as a disinfectant which has its own smell. However chlorine can react with other organic material in the water creating other odors. On occasion odors can also indicate a bacteria presence. If you’re not sure what you are dealing with give us a call to let us help you determine the issue.

How do water softeners work?

Water softeners utilize a resin to facilitate an ion exchange. As water passes through the resin bed in a softener the resin will exchange a sodium chloride (soft) ion for calcium or magnesium (hard) ion. Thus, the resin removes the hard water ions from the water.

Do I need a water softener?

Water softeners are necessary in Arizona in order to protect the plumbing, faucets, and appliances. As such there is no requirement for a water softener, but living without one can be hard; on everything that uses water.

Yes, just ask any of your appliances! Hard water is very damaging to faucets, showerheads, toilets, appliances; pretty much anything that uses water. As for humans hard water causes dry skin and can irritate skin issues such as eczema and acne.

Hard water can be caused by water percolating through limestone as it seeps down to the water table. Since water is the greatest solvent it also has the ability to wear down rocks as the water passes over the rocks. Since Arizona has no shortage of rocks and is not known for lush soil the water is able to pick up higher mineral levels as it passes through the hydrological cycle.

What is Hard Water?

Hard water is water which has a high mineral content. There are different levels of hard water which measures the amount of calcium and magnesium carbonates in the water.

Why not buy treatment equipment from a big box store?

Big box stores sell the same water treatment equipment across the United States which means it cannot be specialized for the location it will be installed. Think of it this way the water is different in Arizona, Montana, Florida, and New York. However, big box stores sell the same solutions in all of the previous markets. Often we find this units give out in a couple of years forcing them to be replaced costing you more in the long run. Have one of our technicians come out and explain the differences in the units so that whatever decision you make it will be an informed one.

Does it matter who installs my water treatment equipment?

Absolutely! If a unit is installed improperly it can create more problems than what it was supposed to solve. Beyond install, the unit needs to be programmed correctly by someone who knows the equipment. For this reason, we have technicians who focus on finding the right solutions. However, when it comes to installing the units we want to you use a professional plumber who does all of our installs so that they know our equipment and so that you know the installation was done correctly and to code.

Can I use my plumber to address my hard water issues?

We do not recommend you use your plumber to address your hard water issues as we get calls every week from someone who went that route and is still having problems that we have to fix for them creating additional expense. Our plumbers are great, but they are not experts at the science of making sure the equipment will fit the customers specific needs. For this we rely on highly skilled technicians. Don’t worry though we use professional plumber to install our equipment so we have the right expertise in the right step of the process.  Rather than take the risk let one of our technicians come out and educate you so you can make an informed decision.